The US today dropped the ‘largest ever non-nuclear bomb’ targeting ISIS tunnels in Afghanistan. 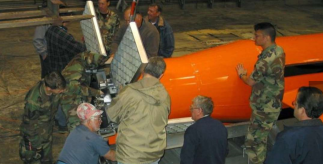 The Pentagon confirmed the strike was carried out by Air Force Special Operations Command using a 21,000lb weapon.

The army targeted ISIS caves and extremists in the Achin district of Nangarhar province after a US special forces ‘Green Beret’ was killed fighting the terror group in the country, according to Fox News.

The bomb was “kicked” out the back of a US Air Force MC-130 cargo plane due to its colossal size, according to the military sources.

“We kicked it out the back door,” one U.S. official told Fox News.

It is believed to be the first time the bomb has been used in the battlefield and the military is currently assessing the damage.

The bomb was first developed during the Iraq War and is intended to target large below-surface areas.

Gen. John Nicholson, commander of US forces in Afghanistan, signed off on the use of the bomb, according to the sources.

“As [ISIS’] losses have mounted, they are using IEDs, bunkers and tunnels to thicken their defense,” General Nicholson said in a statement.

“This is the right munition to reduce these obstacles and maintain the momentum of our offensive against [ISIS].”

A series of tests show the terrifying force of the bomb as it was dropped into water in 2003.

During a press conference yesterday, US President Donald Trump said he plans to send his national security adviser H.R. McMaster to Afghanistan.

He said: “It’s my hope that NATO will take on an increased role in supporting our Iraqi partners in their battle against ISIS.

“I’m also sending General McMaster to Afghanistan to find out how we can make progress alongside our Afghan partners and NATO allies.”

Like Loading...
‹ What can a man do to keep his wife to himself? The answer will shock you…
Nnamdi Kanu emerges as the new leader of Eastern Consultative Assembly (ECA) ›