2018 Budget Cuts – a deliberate move to under develop South East 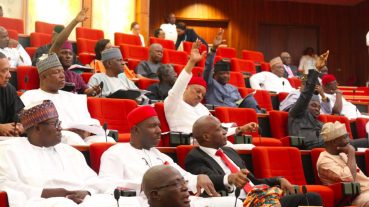 South East Senate Caucus expressed shock over the reported cut in the 2018 budget allocation for the Enugu Airport Terminal.

The lawmakers said that they were jolted to hear that an allocation of N2 billion sustained by the two Aviation committees of the Senate and House of Representatives, was said to have been slashed to a mere N500 million.

The caucus said that it had already summoned emergency meeting of South East lawmakers to unravel at what point the cut was effected and by who.

Members of the caucus are said to have been collectively agitated that a region that hardly receives a fair share of the national patrimony, the little that came its way could be reduced as to make nonsense of the entire budget for the Airport Terminal.

President Muhammadu Buhari who reluctantly signed the 2018 budget on Wednesday said that the National Assembly made cuts amounting to N347 billion in the allocation to 4,700 projects submitted to it for consideration and introduced 6,403 projects of their own amounting to N578 billion.

The President said that many of the projects cuts are critical and may be difficult, if not impossible, to implement with the reduced allocation.

Abaribe confirmed that the caucus is set to meet to find out what went wrong especially at what point the cut in the allocation was made.

The Abia South lawmaker who said that budget documents are verifiable noted that “we are committed and determined to find out who made the cut.”

He noted that they actually lobbied for the Enugu Airport Terminal allocation to be increased to N3.5 billion until the Ministry of Aviation told them that what they had was an envelope which could not be increased beyond the N2 billion allocation.

Abaribe who is also Chairman, Senate Committee on Power, Steel Development and Metallurgy noted for instance that N30 billion was smuggled into the Power budget without his committee’s knowledge.

He said that the N30 billion was listed for expansion and re-enforcement of infrastructure in the distribution companies to reduce stranded firms.

The amount, he said, “never passed through the Senate Power committee.”

He asked “where did such huge sum of N30 billion come from.”

He noted that “in the case of the Enugu Airport Terminal and the Second Niger Bridge, we want to find out at what point the cut was made.”

Like Loading...
‹ Why many more people will die in Benue State
Arrest of Senator Enyinnaya Abaribe – a ploy to silence Ndi Igbo ›