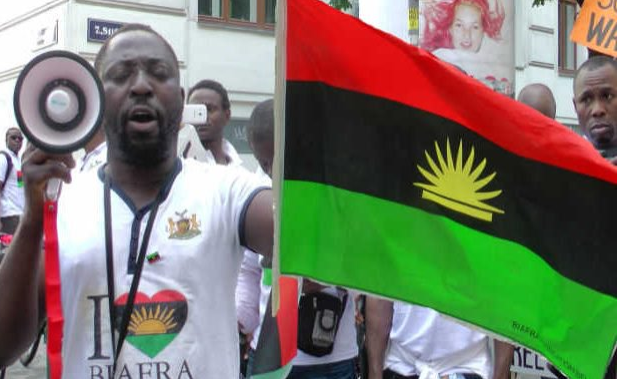 We the indigenous people of Biafra (IPOB) and it’s leadership worldwide under the command and leadership of Mazi Nnamdi Kanu condemn unequivocally the senseless and barbaric attack against innocent worshippers during Sunday service at the Catholic Church Ozubulu in Ekusigo LGA of Anambra State that consumed the lives of many Biafrans including a pregnant woman and small children.

This massacre of our people in Ozubulu as with other indiscriminate slaughter of our people around Nigeria is a constant reminder to us all all of the threat we face each day we delay our exit from Nigeria. Unfortunately for us, these heinous crimes will be visited upon us at predictable intervals until we collectively summon the courage to demand for our right to a referendum that will settle this once and for all time.

It won’t come to us as a surprise if after all the investigations it turns out that those behind this despicable crime are individuals sponsored by dark forces within Nigeria intent on destabilising the IPOB’s relentless march towards the liberation of Biafra and other ethnic nationalities under the yoke of Hausa Fulani Islamic domination in Nigeria. We believe that no sane mind can attribute this level of evil terrorist attack on Ozubulu as a direct result of a business transaction gone wrong in far away South Africa.

It is unfortunate that Government of Anambra State and Nigeria security agencies especially the Nigeria police who are required to enter into detailed investigation with the view to apprehending the culprits, merely concluded within an hour that they know the cause and the perpetrators of the crime. We don’t know when Nigerian Police acquired this level of efficiency and excellence that enabled them to conclude their investigations within an hour. Does it mean they had prior knowledge of the crime and if so why weren’t measures put in place to preempt it?

Also, it is very dangerous that the countless Police and Army check points along the roads in Anambra State, especially along Onitsha-Owerri Road leading to Ozubulu did not intercept the murderers, given that crime detection and prevention is often cited as the main reason why AK47 brandishing Hausa Fulani police and army recruits litter Biafran roads. The Hausa Fulani run security agencies in Nigeria must explain where the assassins got the army uniforms they used in the attack from. Instead of carrying out thorough scrutiny of vehicles, they are busy collecting money from frightened motorists.

We are alerting the international community, men and women of good conscience to prevail on Nigeria and Anambra State Government to constitute an independent and transparent panel of inquiry to ascertain what actually happened because this level of brutality is unheard of in Anambra State and entire Biafranland before now