Home › Igbo news › I for one would rather live a short life and die as a free man than live a long life as a slave.

I for one would rather live a short life and die as a free man than live a long life as a slave. 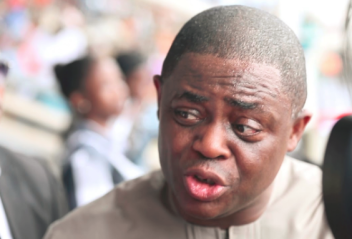 There will be times that we are powerless when we face evil, injustice and tyranny, but there must never be a time when we fail to protest.

This man Buhari is a cancer that keeps growing and the only proper thing to do is to cut it out.

Some say that the path of uncompromising and relentless opposition that we have chosen is a dangerous and unpredictable one. They forget that the wounds of honor are self-inflicted.

If you want to be set apart and regarded as a man of courage, truth and honor, the champion of the oppressed and the voice of the voiceless you must be ready to take the blows, wounds and dare consequences that go with it.

William Shakespeare wrote “cowards die many times before their time, but the valiant die but once” whilst Wole Soyinka wrote “the man died in him who remained silent in the face of tyranny”.

To top it all one of the most courageous souls of the 21st century, Edward Snowden, who is the American spy that defected to Russia two years ago, wrote “speak not because it is safe but because it is right”.

Some of us have chosen to be valiant and have refused to remain silent. We made a choice to stand up and resist the chicanery and wickedness of this administration and we are prepared to pay the price for the choice that we have made.

I for one would rather live a short life and die as a free man than live a long life as a slave. The Bible says “he who holds on to his life will lose it and he who is ready to give up his life for my cause will gain it”.

I do not fear any man or any circumstance because I know the God that I serve. I am a servant of truth, a warrior of light and a child of the Living God: I bow to no man and I do not tremble before tyrants.

I will endure anything and pay any price to liberate my nation and deliver my people from the chains of perfidy, ignorance and oppression and from the tyranny, evil, manifest corruption and double standards of the Buhari administration.

Like Loading...
‹ Who signed the 1914 amalgamation of the Northern and Southern Regions of Nigeria?
The grand deceit in Buhari’s supposed anti-corruption fight – the evil with one Nigeria ›